On Sunday, July 25, 2021 a new era in ball hockey began as the Greater Toronto Ball Hockey League played their first games. Just before the pandemic began the GTBHL announced the formation of the new league that brought together the two superpowers of the sport Ballhockeyleagues.com (formally the Northwest Toronto BHL) and the North Central Ball Hockey League plus Ball Hockey GTA to form a new alliance. 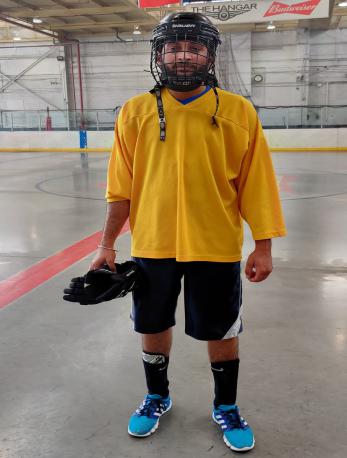 The first week of games brought many happy faces and very competitive games. It was amazing to have everyone back! All the teams played hard and fair. It was an awesome atmosphere as the league supplied refreshments and a DJ to bring a great energy to the arena. The first ball dropped at 1pm and pitted the Vipers against Wolfpack in a Tier 4B matchup. It was a very spirited affair with the Wolfpack winning 3-1.

Before the game league coordinator Pino Panza said a few works alongside convener Jeff Cantor as they welcomed everyone back. A ceremonial faceoff was taken by captains Jacob Bujold (Vipers) and Jashan Sandhu (Wolfpack). And it didn't take long as the first goal of the game was scored ay 3:46 off the stick of Jeevan Sandhu.

The GTBHL would like to thank all of its managers, teams and staff for a memorable first week and best of luck in the return of ball hockey in this 2021 summer season.