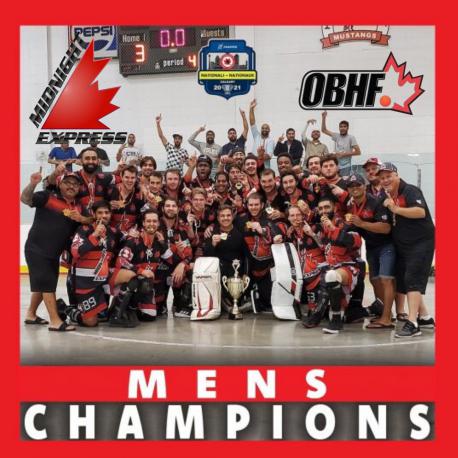 The CBHA hosted it's National Championships in beautiful Calgary, Alberta from August 9 to 14. Seven teams battled for supremacy and claim the Championship that was uncontested in 2020 because of Covid. Ontario was the reigning Champions as the New Tecumseth Xtreme won the title in 2019. It was Ontario's first title in eight years. And it was exactly ten years ago the Brampton Midnight Express last won the coveted Championship.

Now with a young, fast and tenacious group the management team of John Ventullo and James Mentis put their best feet forward. The team took some time to get the rust off, seeing most of these players haven't played competitive ball hockey since March of 2020. An opening night 2-1 loss to the two time National Champs Edmonton BHC didn't faze this team as they pulled off two big wins in consecutive days with wins over the hometown Calgary Phantoms 6-3 and then 2-0 over the Vancouver Falcons. In their last game of the round robin the Express had a chance for a bye to the semi-finals. Unfortunately the Express blew a lead late and lost 5-4 to the Edmonton Nighthawks.

So back to the drawing both on Friday afternoon for a quarter-final matchup against the Saskatoon Buffalo. The boys came out firing and took a 4-0 lead and held on for a 4-2 win setting the stage for a rematch against the Falcons, who were well rested after a QF bye. This was a seesaw affair as teams exchanged leads. But Zack Rheaume would be the hero with the overtime winner. Make the final 4-3.

Saturday afternoon the Express would face the team that eluded them on opening night the Edmonton BHC, who knocked off the defending Champs New Tecumseth Xtreme, to nullify an all Ontario final. This was a game for the ages. Two evenly matched teams with very little separated these two juggernauts. An intense game from start to finish with three lead changes. After regulation the score was deadlocked at 3. Overtime was needed to crown the Champions. The teams would step on the floor for a ten minute 4 on 4 sudden death overtime. The game would not be settled so a second overtime was played 3 on 3 for ten minutes. Numerous changes, odd man rushes, breakaways and spectacular saves from both goaltenders! The dreaded shootout would decide the 2021 Championship. It was the nifty Marcel Mallais, shooting third, that would score the first goal in the shootout followed by the game clinching goal by Daniel Setacci. And the rest is history! Brampton Midnight Express 4 Edmonton BHC 3.

Special congratulations to John Ventullo, who has been a staple in our league for many many years. And of course the GOAT James Mentis who put away his shoes for a clip board and keeps the legendary Midnight Express name on top of the ball hockey world.

On behalf of the Greater Toronto Ball Hockey League and the Ontario Ball Hockey Federation a hearty congratulations to all the players, coaches and support staff. Ontario is back!